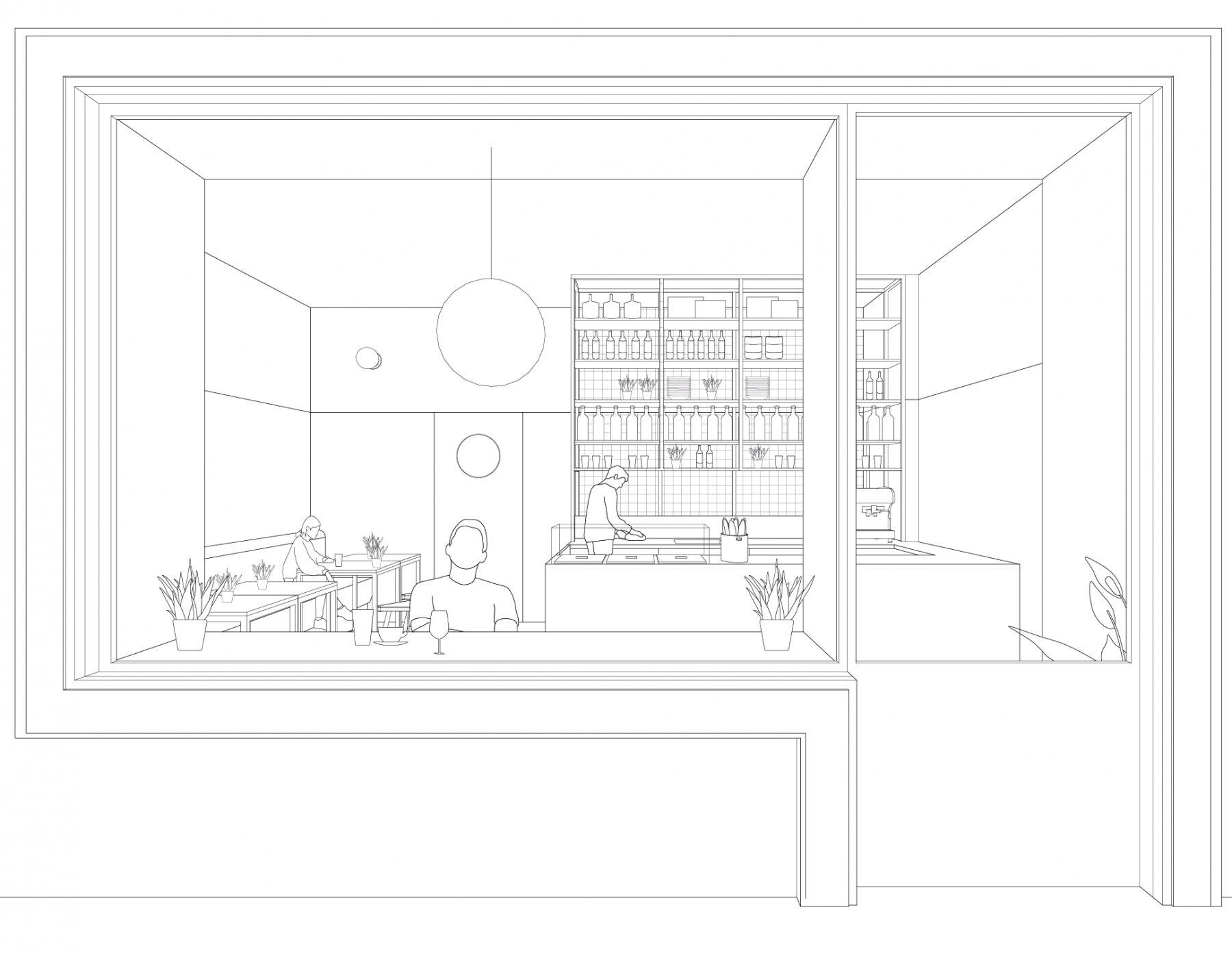 This outlet covers 25m2 on the ground floor of a building located in the Príncipe Real neighborhood in the historic city center of Lisbon. The concept essentially revolves around a grab&go service, where quick meals may also be served up during the day.
The ground floor functions as an area for serving clients alongside a small kitchen. Additionally, on the lower floor, there are sanitary installations and a small storage facility.

From the store’s exterior, there is a glass display window framed by a strip of marble that extends around the existing openings. This feature is one of the few remaining original features, which gets replicated along the street to frame the shop windows in the adjoining buildings.
This pre-existence was the departure point for the architectural project. In an attempt to enhance this, within the same logic, we designed its extension through to the interior. This new piece both accompanies the design of the openings as well as defining the transition between the interior and the exterior of the store through its mono-materiality. Taking advantage of the depths of the wall and up to the height of the existing window, this also included a long table with views of the street running along with its entire extent.

With the objective of dowsing the stairway in natural light, we proceeded with the demolition of the wall separating the main area, replacing it with an emptied structure made out of metal and a white net that rises up to the ceiling and thereby dividing the two spaces.
The placement of this shelf defined the positions of the service counters that run parallel to the facade and thus rendering them more visible from the exterior.
This further integrated a running leather padded bench spanning the longest wall in the space so as to correspondingly maximize the number of seats while occupying the minimum possible area.

In parallel, this attributed priority to injecting personality into the space through the utilisation of materials applied in their untreated forms and according to a minimalist aesthetic.
On the walls, a blue wall section expands upwards over the space up to the height of the openings and then followed by either a white surface or mirrors up to the ceiling thereby balancing the area vs height proportions. For the floor, the option favoured a dark cement paving able to interrelate with the original marble frame. 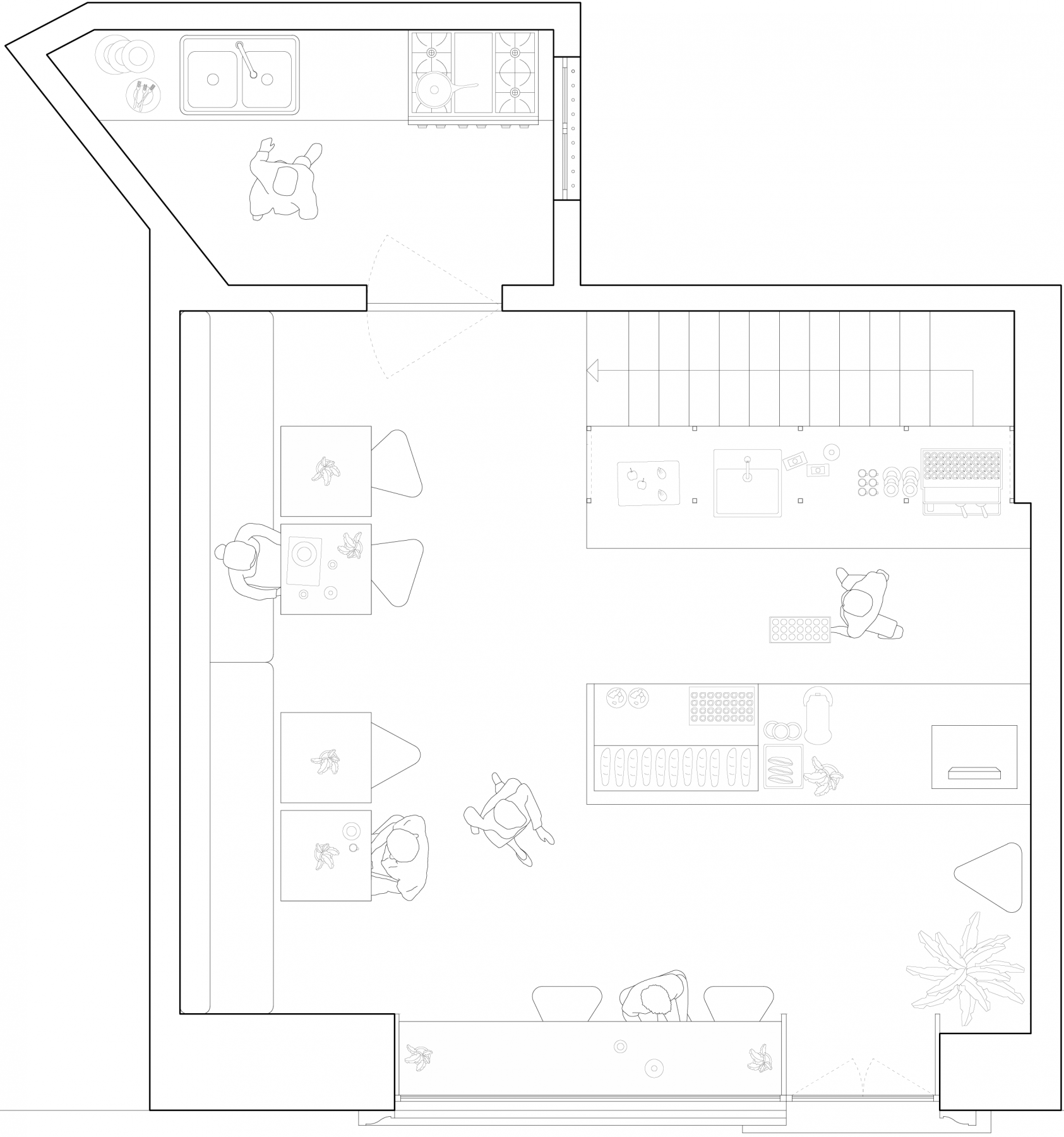 The finishings applied to the counter fronts followed the same logic of contention with a stainless steel finish replicated over the surfaces of the tables purpose designed for this setting.
The white shelf, contrasting with the blue background to the wall, is laid out with the groceries or fruits of the day in amongst the suspended kitchen utensils that decorate this space in a functional and at ease aesthetic.
The selection of a palette of pastel colors, with occasional wall lighting, notes in wood, and the integration of plants into the space all harmonize the geometrical setting of the spatial design. 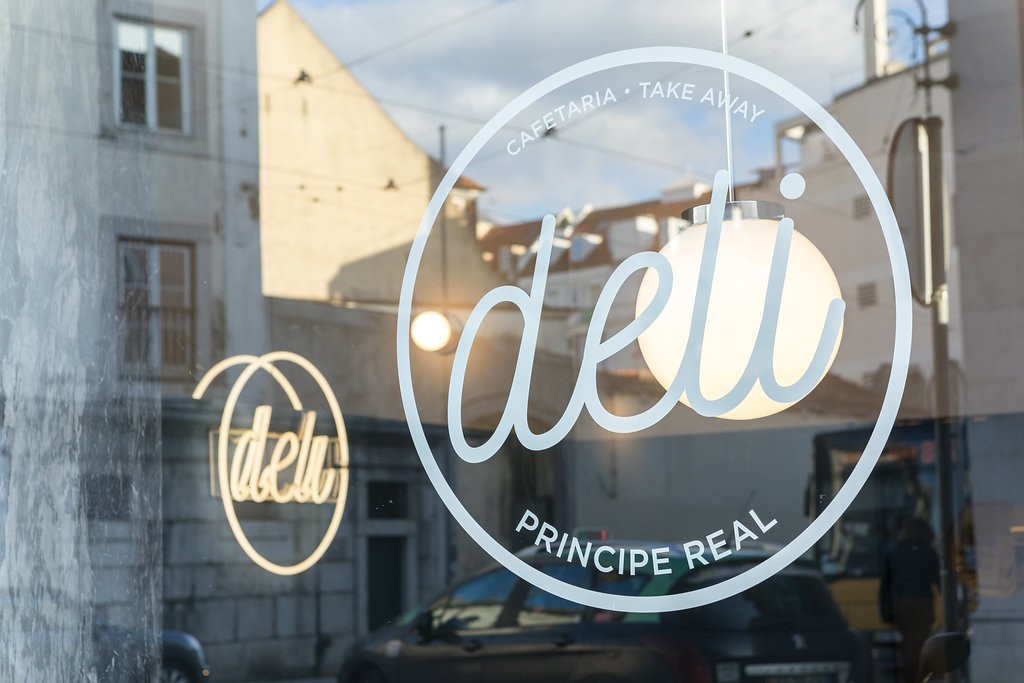 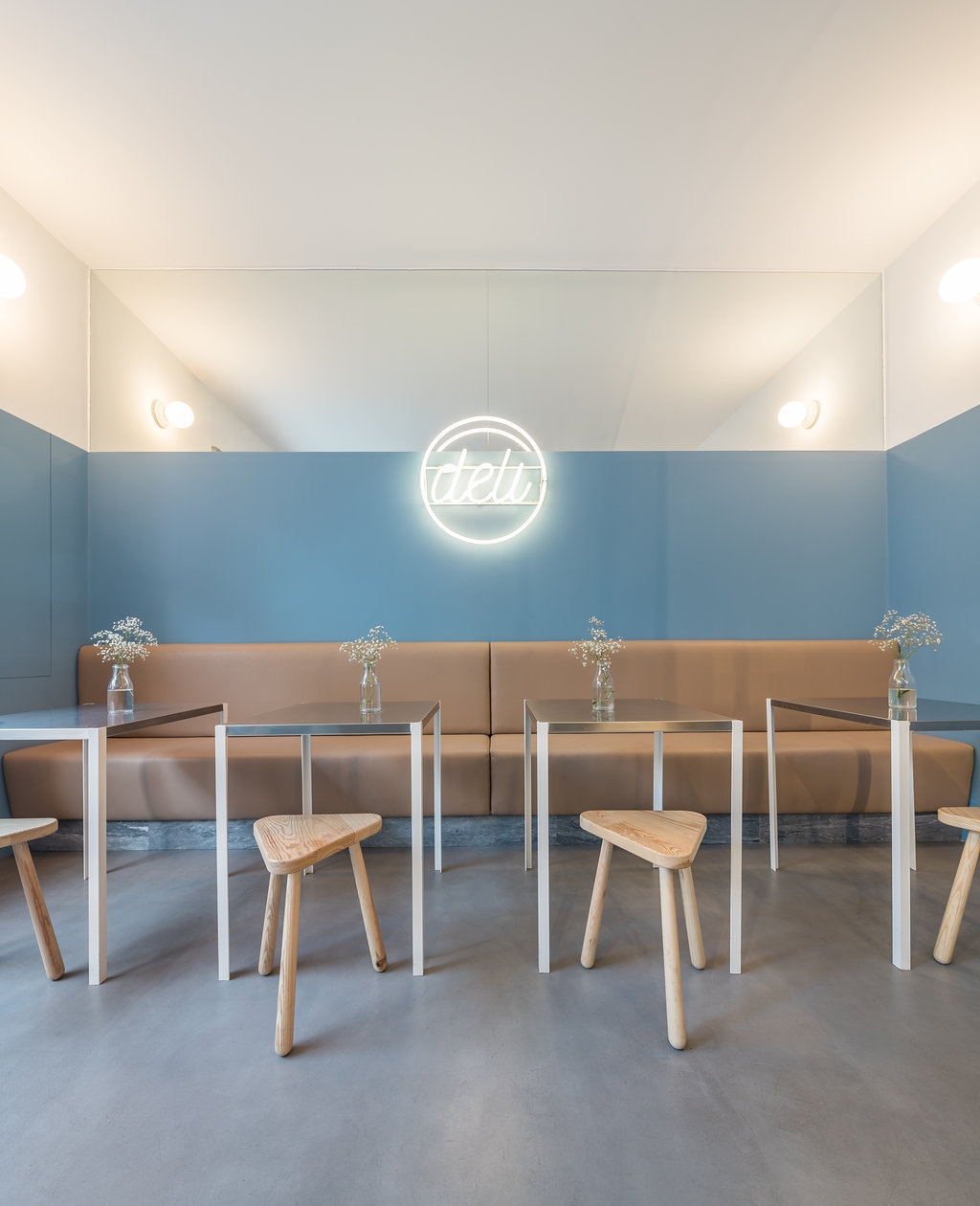 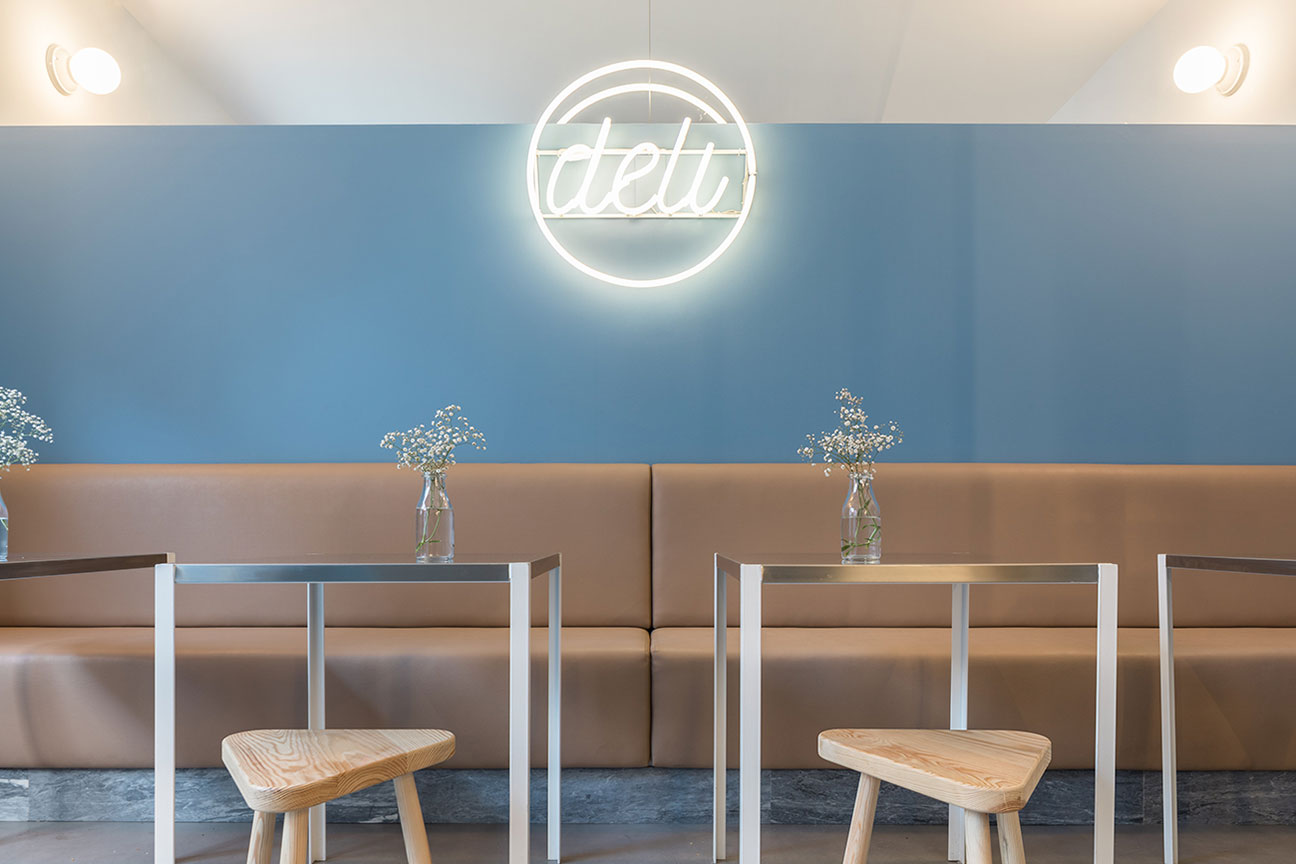 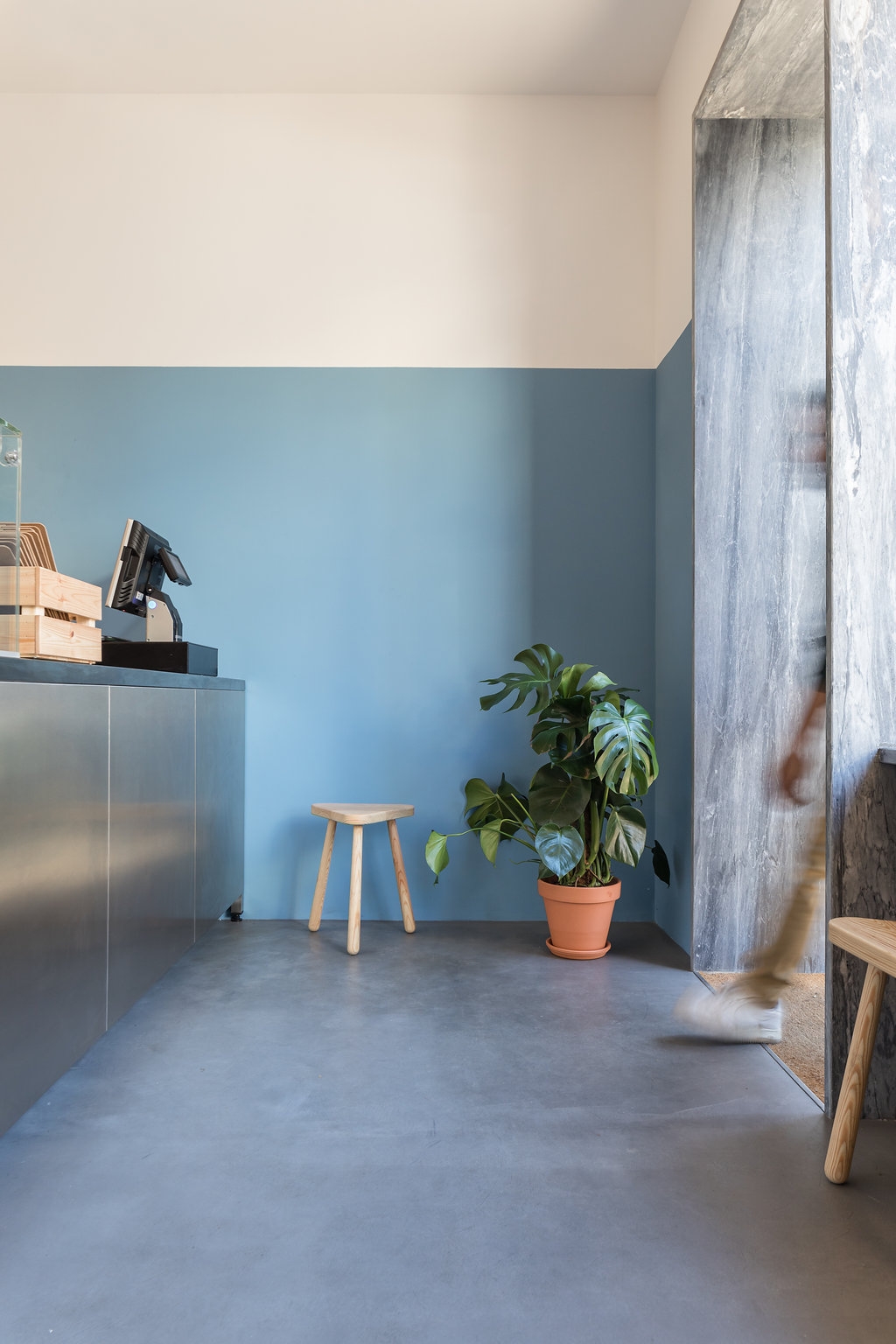 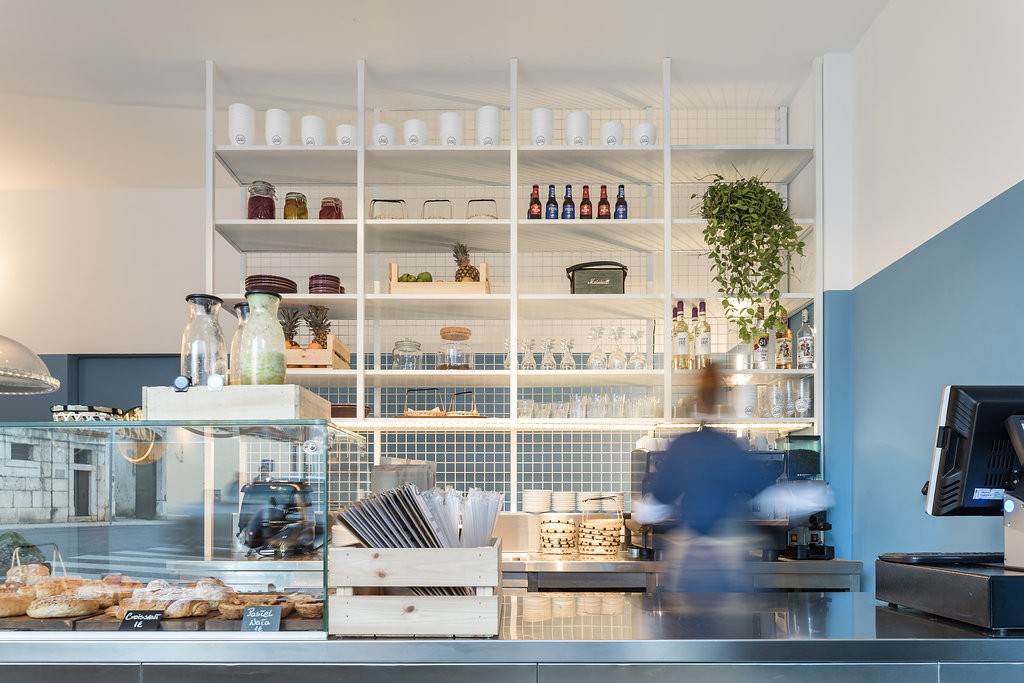 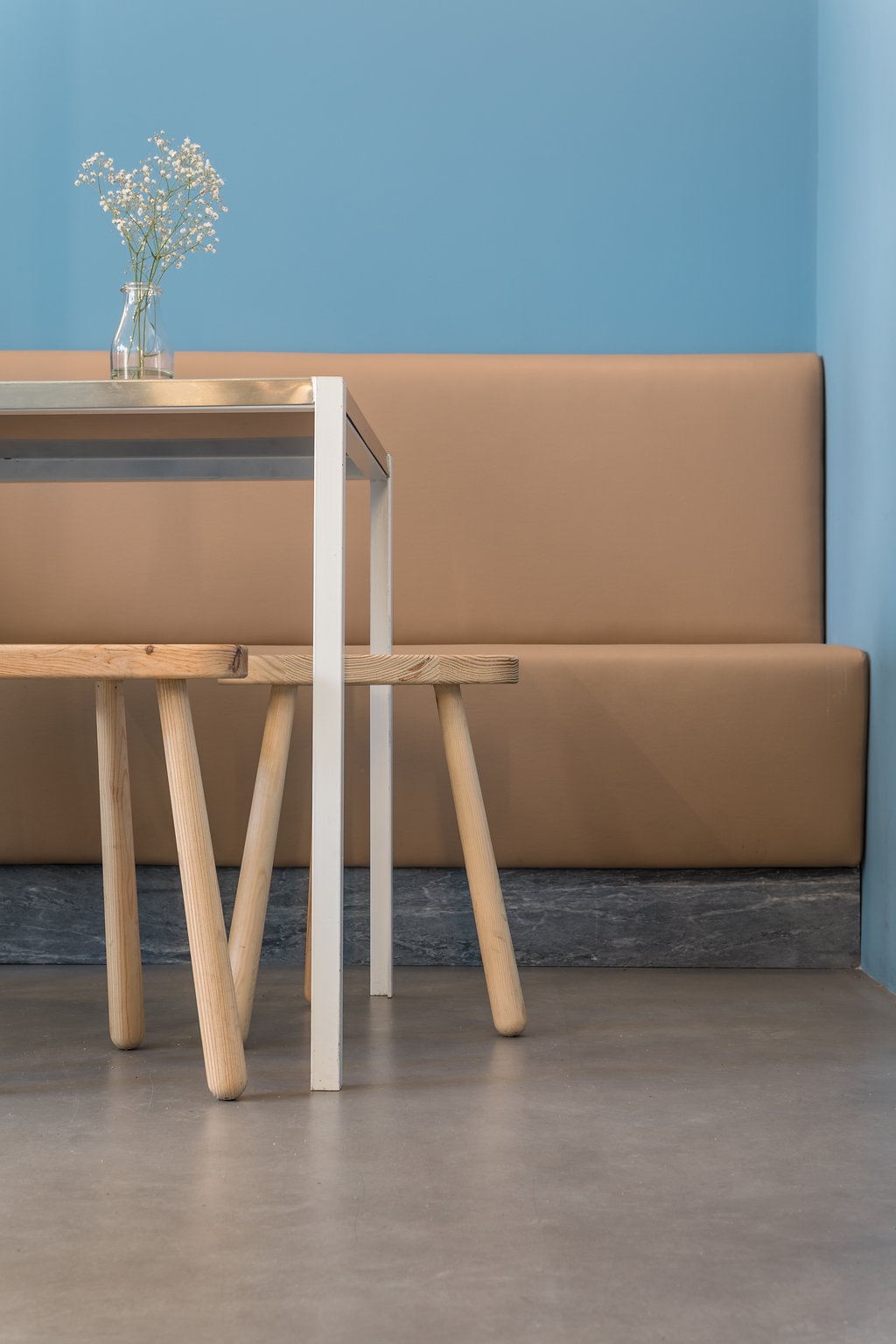 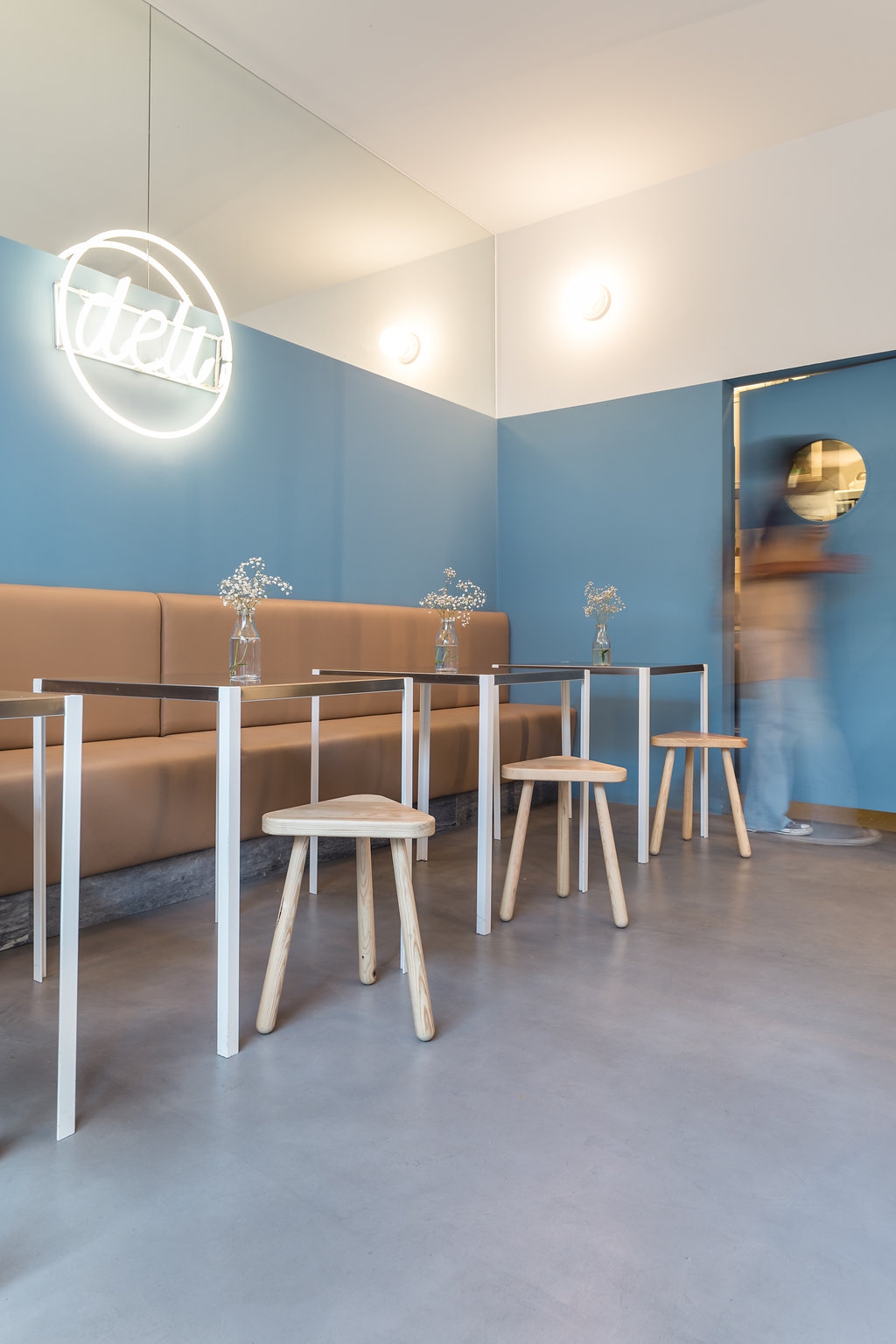 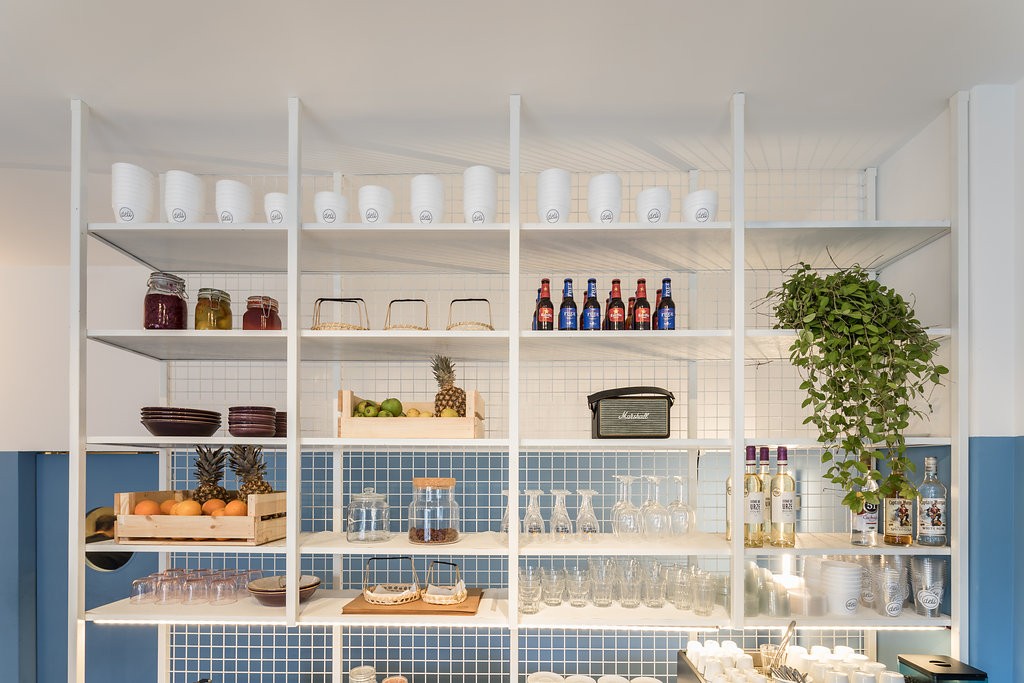 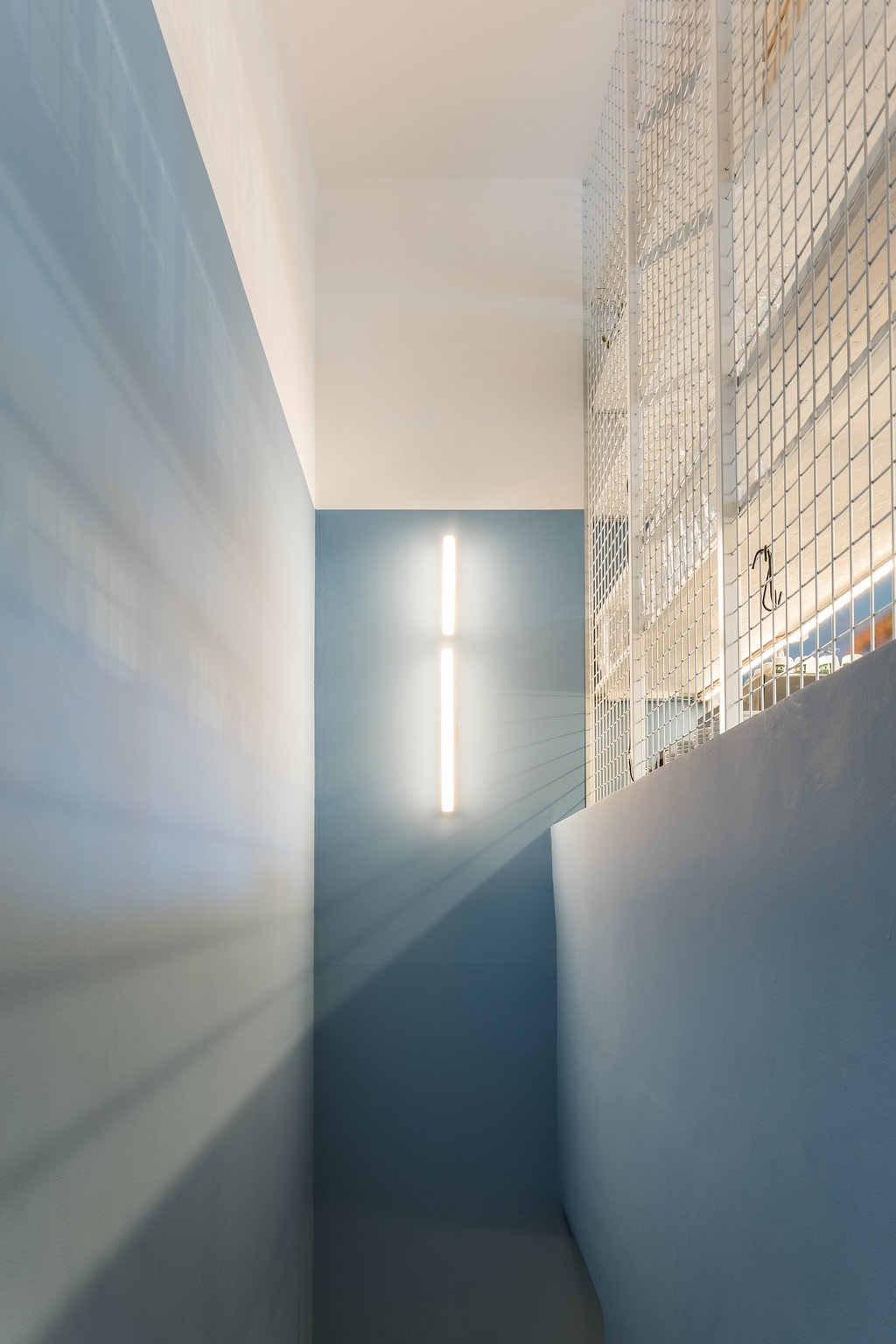 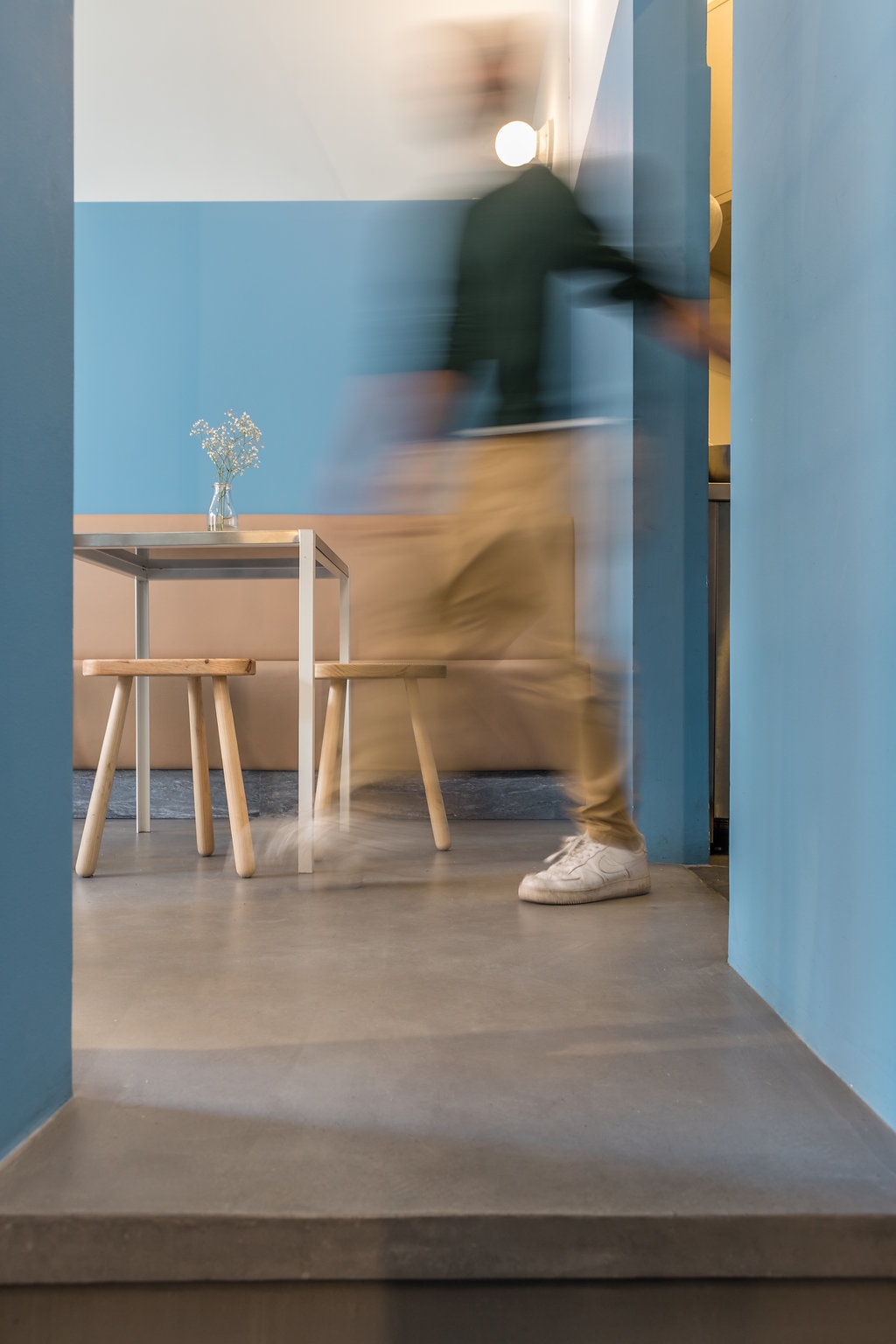 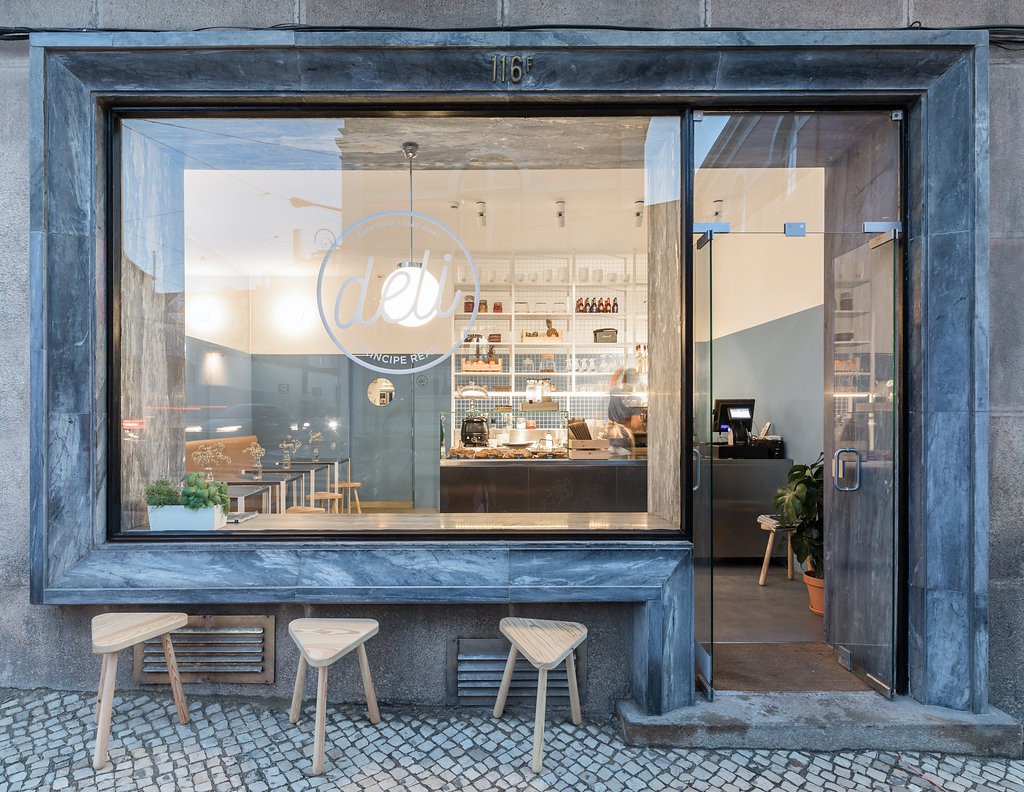